Albergues  are often similar to hostels, but hostals can be like hotels – Albergues cannot.

A small guide through the accommodation jungle which you will encounter on the Portuguese and French Way of St. James.

Let’s start of easy because most people can imagine what a Hotel roughly looks like.

Hotels usually have a reception and offer breakfast for their guests. The rooms are either single bedrooms or double bedrooms with a bathroom. The beds are freshly made, and you’ll have towels ready for you. Often this will even include a TV in your room.

The Hotels that pilgrims usually stay in, to have a good and central location but not pay a fortune, (on the Portugues the single room which is around 35€, on the Frances 42€) are obviously no luxury hotels. Often, they are very lived in and outworn, with slightly damaged dark wooden furniture, a potentially squeaky bed, towels that are no longer fluffy and light, and a lift that is questionable.

But they still are a good choice if they are clean and in a cheaper price range, one can look over the lack of style in their interior design. 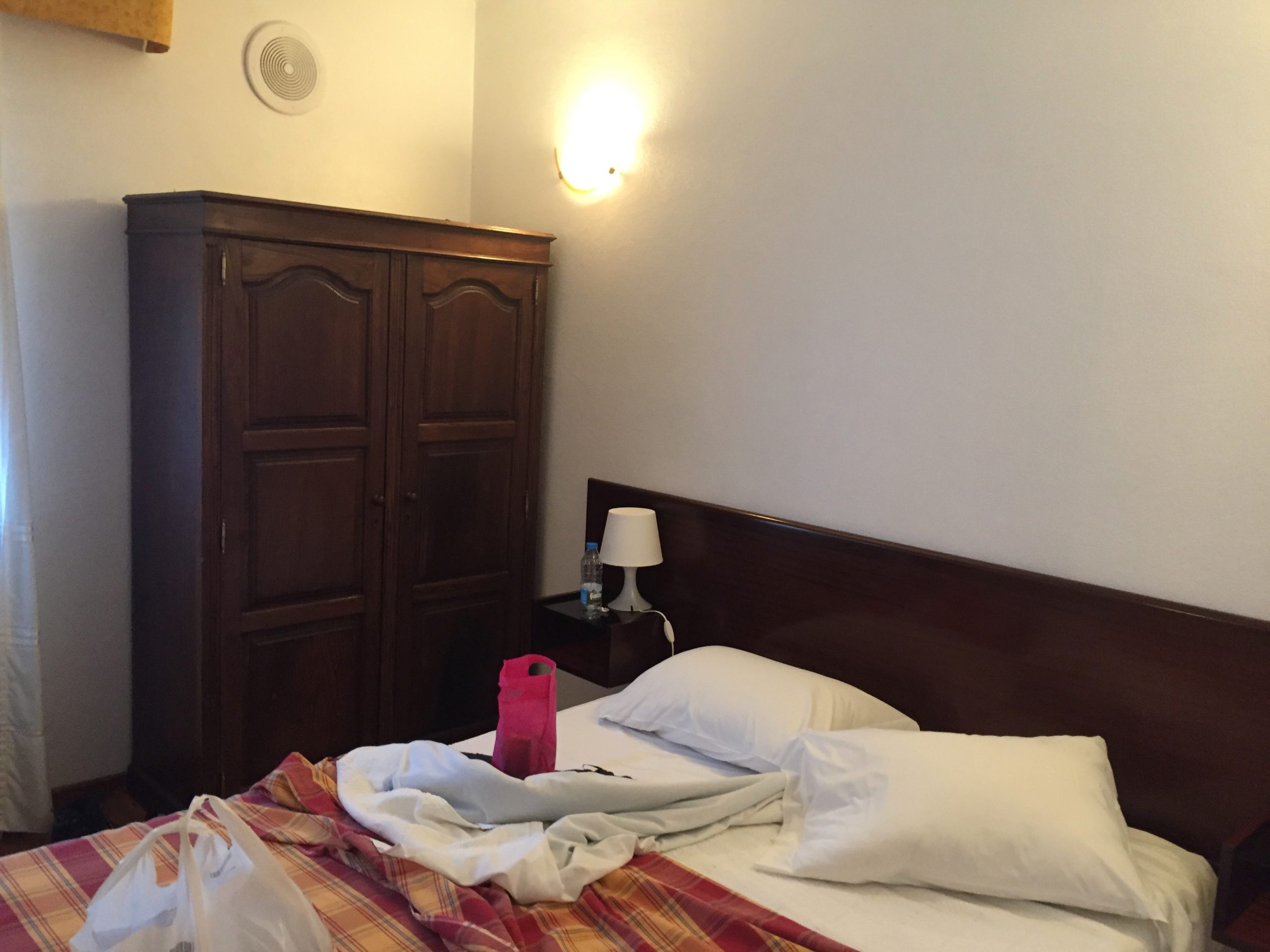 A good example of a Hotel like this is the Hotel Val Flores in Valenca, lying on the Spanish border of the Camino Portugues. The single bedrooms with an ensuite cost 30€. The Hotel is central, the women from the reception are very helpful, and everything is cleaned well, but you just wouldn’t want to spend a whole vacation there.

A Pension is not necessarily worse than a hotel when it comes to their comfort they are, however, structured differently.

They usually do not have a normal reception but are connected to a restaurant, café, or store, in which you would also check into your room. Sometimes you’ll even have to call the owner once you arrived.

They usually offer single bedrooms, double bedrooms, and sometimes even family rooms. Often you can either get the rooms with an ensuite, or ones with a shared bathroom for less money.

Bedding and Towels are provided, and you will often find that the rooms here are furnished with lots of love.

Partially, pensions are in normal Houses and used to be apartments, which sometimes gives you the feeling of living in a Shared House. 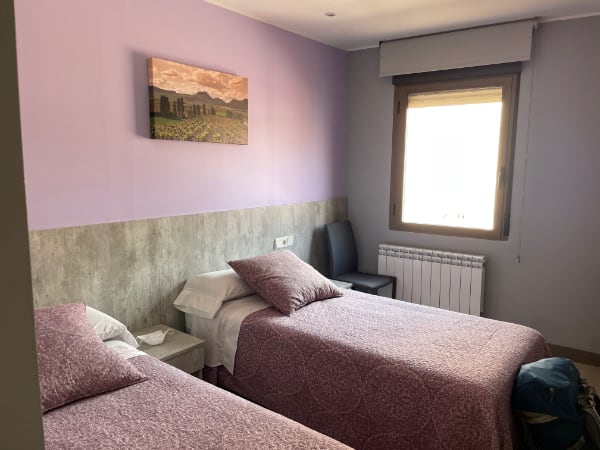 An example of a pension like that is the Pension San Lorenzo in Najera.

Your Check-in would be in the store below and you’ll stay in a bedroom – with or without an ensuite and another 5 bedrooms on the same floor. The room with a shared bathroom costs 30€ and that with an ensuite is 43€.

A Hostel (Spanish: Hostal) always has shared rooms. This means you can book a bed in a dormitory with 4-16 beds.

With those beds, which usually cost between 10 and 30€, depending on their comfort and location, you will have shared bathrooms.

The comfort range does vary – some rooms are very modern, and the beds have curtains to create a space for privacy, a bedside table/ledge, a socket, and a reading light, as well as a locker for your belongings.

Other hostels have more of a youth hostel/armed forces flair to them or you will get into a room, furnished with rows of the cheapest IKEA bunk beds.

The beds in the shared rooms are only partly made – in classic pilgrim places, that tourists usually don’t go to, it can happen that they will not offer you any bedding automatically, but that you must rent it extra.

The same usually goes for towels which are usually not offered in a shared room.

Hostals often have single private rooms with or without an ensuite/own bathroom. However, they are often way more expensive than those in hotels and pensions in the area. They do usually come with bedding and towels.

The reception in hostals is mostly occupied by a younger person, they have a shared lounge and often even their own bar. 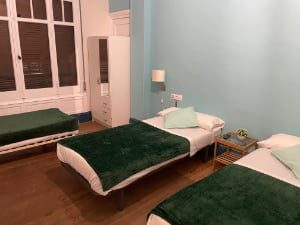 An example of a Hostel is the Zentric Hostel in Leon on the Camino Frances. It has sleeping halls, two- and three-bed bedrooms, shared bathrooms, and a kitchen in which you can make a coffee.

An “Albergue" is a cheap and usually less comfortable option for accommodation which is often preferred by pilgrims – if this is either for financial reasons or the fact that the lack of comfort is part of their journey along the Camino.

There is a difference in Albergues, being that some of them are private and some are public Albergues.

Private Albergues usually have the same rules hostels have, can cost up to 30€, and can be quite comfortable, like a hostel. They do, however, normally cost around 8-15€ per night and are not the most comfortable.

The shared sleeping dorms here are usually bigger than the ones in Hostals and you might end up sharing a room with 30 other people. The number of bathrooms often does not add up with the number of guests staying either.

Bedding and towels are usually not offered but often you will get thin blankets that you can throw over your sleeping bag. The mattresses are often covered with some sort of plastic and sometimes even a bedsheet.

State/Church-owned Albergues are mostly kept on a donation base which means that there is no fixed amount of money.

A night here is usually a fair amount less comfortable compared to the private ones. Often, they don’t even have beds and only offer you a mattress and blanket to sleep on the floor with. Or you could end up sleeping on the floor of a fire station or the front room of a church.

Other state-owned Inns are a bit less improvised and are led with a lot of love by their Hospitarios, in which case the lack of comfort in your sleep is balanced out with a lovely community experience.

Those state-owned hostels were aimed to enable those with less money to still make a pilgrimage. They would get a bed, some water, and bread which allowed them to go on their pilgrim journey independently from their own wealth.

Unfortunately, this is almost not possible today because adventurous pilgrims take up those spaces although they could afford accommodation somewhere else. And because hostels give their beds out thinking “first come first serve” and not to those who need them the most, this concept no longer works.

One disadvantage of both kinds of Albergues is that they have a “lockup time” in which they lock the doors in the evenings. This usually happens around 10 pm, depending on the hostel at 9 pm or 11 pm. The problem is that the restaurant kitchens in Spain often only open at half past 8 in the evening.

In the same way, in which you will be locked in in the evenings, you will be kicked out in the mornings – usually, until 8 am, hostels like this are not for long sleepers. Most of the time you will be woken up by other pilgrims packing their bags and leaving early to get a good bed at the next stage of their journey. 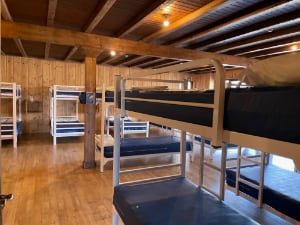 An example of a private hostel is the Albergue a Reboleira in Fonfria on the French Way of St. James. You’ll get a fair amount of comfort here, getting pillows and often even sockets to charge your phone next to your bed – so it actually is like a Hostel. A bed here is 12€.

Furthermore, you do have the option to go camping, that is, outside somewhere. It is not allowed but is often tolerated.

There also are some Airbnb’s or opportunities for Couchsurfing along the Way of St. James, particularly in the cities – this can often be a good alternative.

I plan your pilgrim holidays – individually and flexibly

Let an experienced pilgrim plan and supervise your very own hiking holiday and start perfectly prepared for the Way of St. James!

I want to know more!