The Portuguese way of St. James leads from Lisbon to Santiago de Compostela in Spain and embraces 620km. If you still don’t have enough after that route you can add 90km more to get to Finesterre.

Most pilgrims usually focus on the long route of 240km from Porto to Santiago first because it is walkable within 23 weeks’ time and therefore fits into the usual vacation time span.

In Portuguese the way of St. James is called “el Caminho Português” and in spanish it is called “el Camino Portuguès” which is a confusing language similarity between the two languages – which are so similar but yet so different. This difference comes up massively after you have just spent a week in Portugal and then travel on to Spain (by ferry or crossing a bridge, depending on what is planned). It makes it very hard changing the order of a “cafe con leite” to a “cafe con leche”.

The path is incredibly well marked. You have to follow yellow arrows which usually are sprayed onto the floor or a wall and sometimes are swapped for nice looking signs made out of stones. 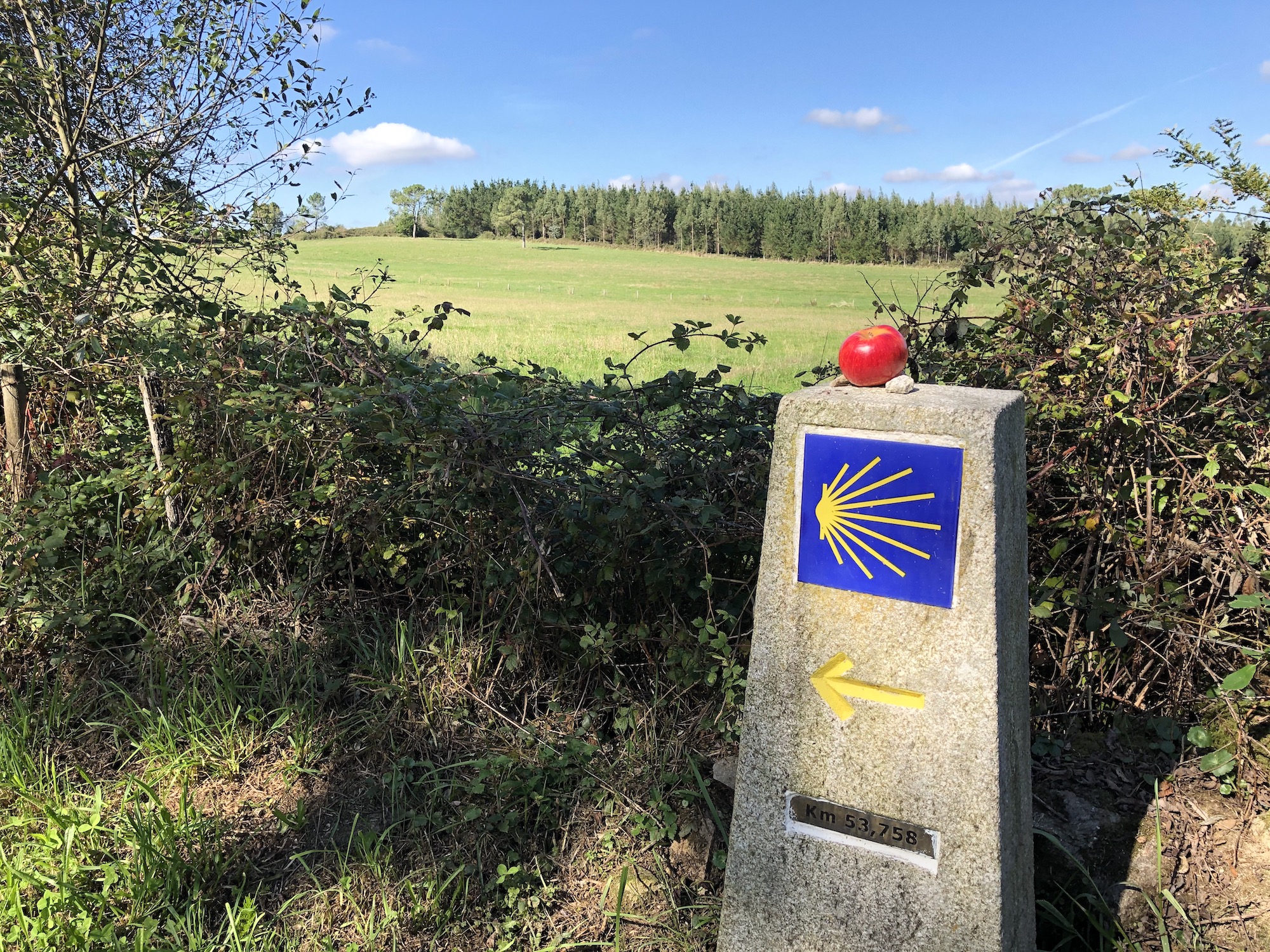 The camino portugues currently is the second most famous path for a pilgrimage after the camino Frances (55% in 2019) and becomes more and more famous every year. It is being walked by 27% of pilgrims at the moment. Those numbers mostly refer to the more inland section Porto – Santiago. Whoever is looking for peace and quiet can still walk the camino portugues but should only walk the coastal route or the route from Lisbon to Porto.

However, you can still take the inland path and make sure that you are picking a time or season which is less busy. If you start walking at eleven, you will barely meet anyone on your hike.

From Lisbon to Porto

The path in between Lisbon and Porto is quite calm and there are many pilgrims who don’t even know that the path usually starts in Lisbon.

I can calm you down now: The path is not ugly!

If you want more photos from that section: follow this to get to the gallery

Of course not everywhere is idyllic. It is a historic path to hike and Portugal did not build a Disneyland scene around it just for pilgrims. It leads you through the real Portugal and shows a lot of landscapes as well as industries in between. But it has heavenly little places and stunning eucalyptus woods to offer.

Yes, there are more tarmac paths than up north but they can still be beautiful! 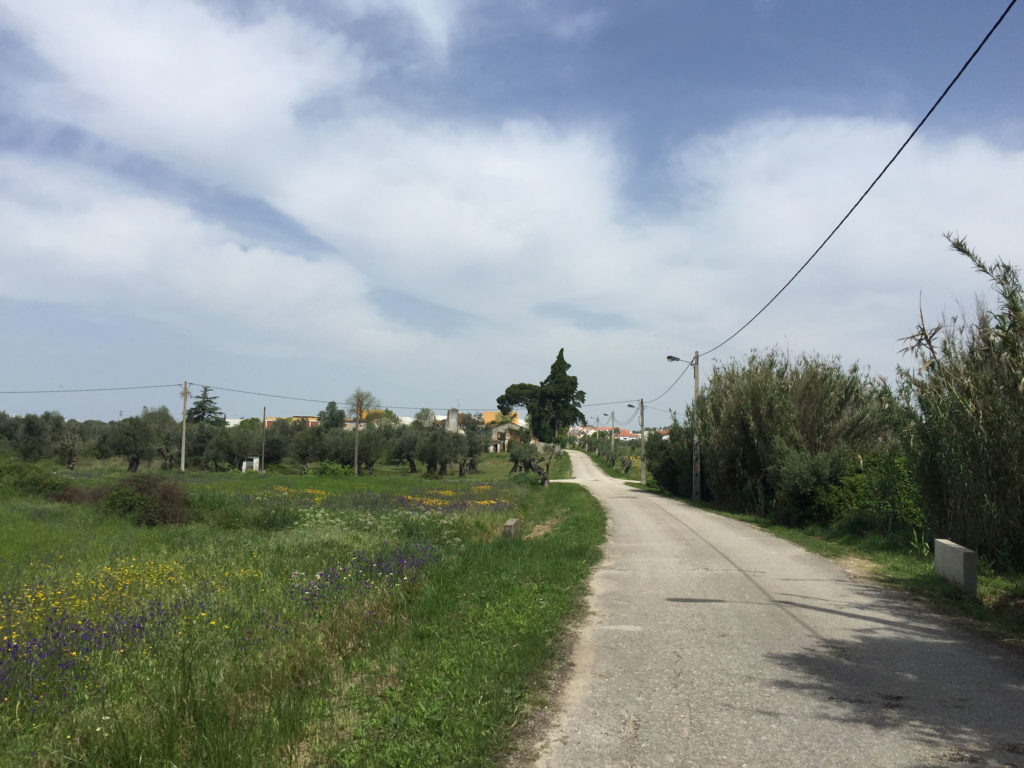 And as we know, beauty lies in the eye of the beholder. I would have never called this section of the path as ugly. The most things i found where beautiful nature and cities worth seeing like “Santarem” and “Coimbra” – not even mentioning the beautiful Lisbon.

There are many eucalyptus woods and a lot of field paths leading through beautiful landscapes that you are able to tread contemplatively and peacefully. And – as I said before – cities you would never visit usually but are worth seeing.

I can only recommend the Lisbon – Porto route because it is empty and very international.

Once arrived in Porto the Way of St. James splits into two variants: The central way and the coastal way.

Most pilgrims decide to go for the second variant, out of two reasons:
1. There are more hostels which most pilgrims sleep in. (We hotel pilgrims don’t have to care about that because there are cheap hotels on both routes)

2. it is more busy and you get the chance to meet more people leading to a bigger pilgrim community.

Contrasting the coastal way, the central way is more diversified and leads through beautiful nature, offering a lot of accommodations for you to stay in.

The first – or first two stages, depending on their length – most pilgrims walk along the coast and change to the inland path once they get to Ponte de lima. The reason for that is that the first stage walking inland from Porto onwards really isn’t that pretty. It will have a lot of industry and little charm about it unfortunately.

As soon as you change to the central path you will primarily walk on gravel paths leading through varied landscapes, through woods, eucalyptus woods, small localities, mountains and more… 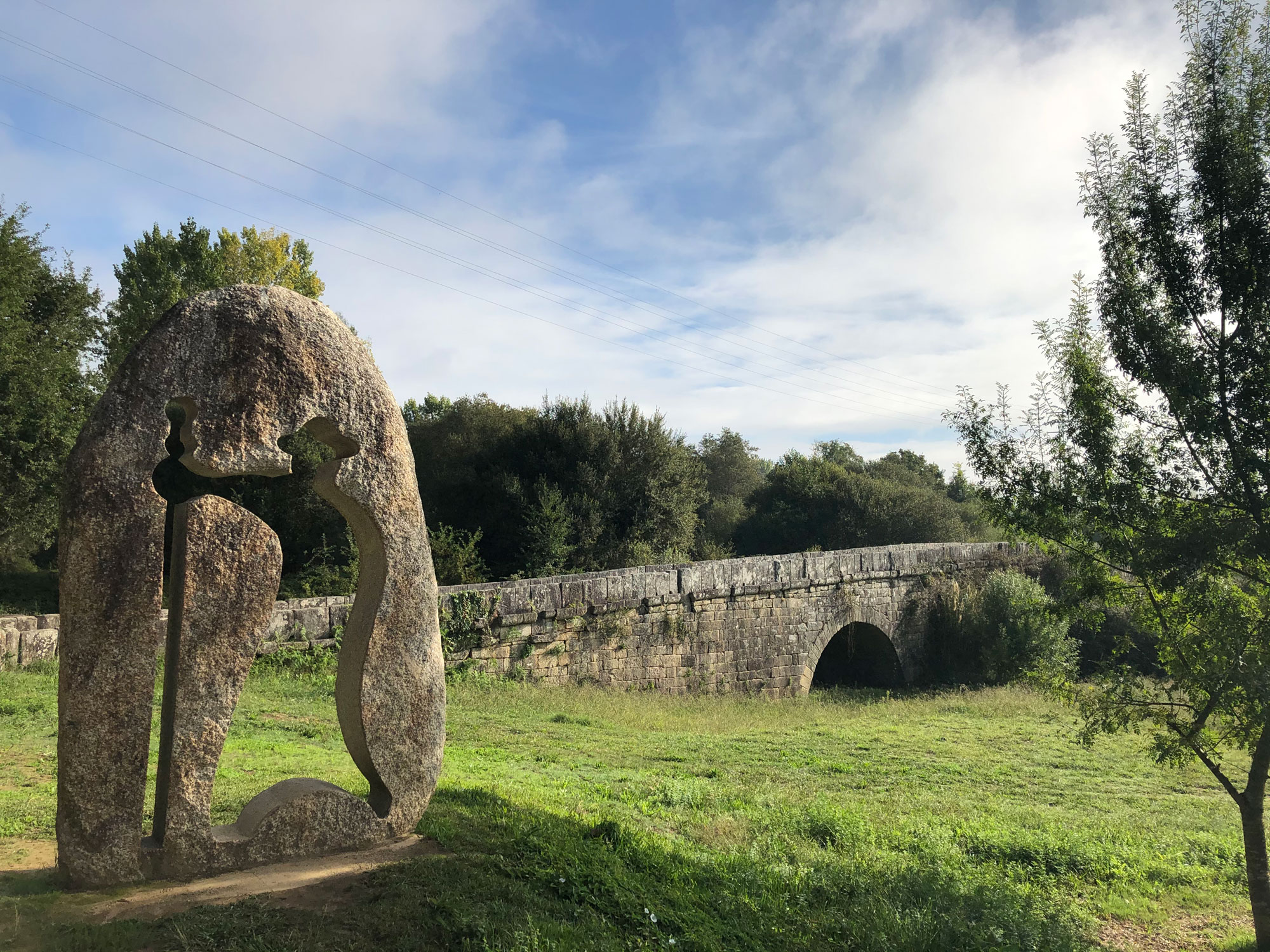 If you want to see more pictures: here is the picture gallery

As pretty as the inland path might be: anyone who loves the ocean will be happy walking the coastal path.

To prevent any misunderstandings: the coastal path does not only lead you along the coast. It also has sections leading through woods and over mountains.

But it does have you walk along the ocean. At the beginning mostly on wooden planks, which are characteristic for the coastal path. 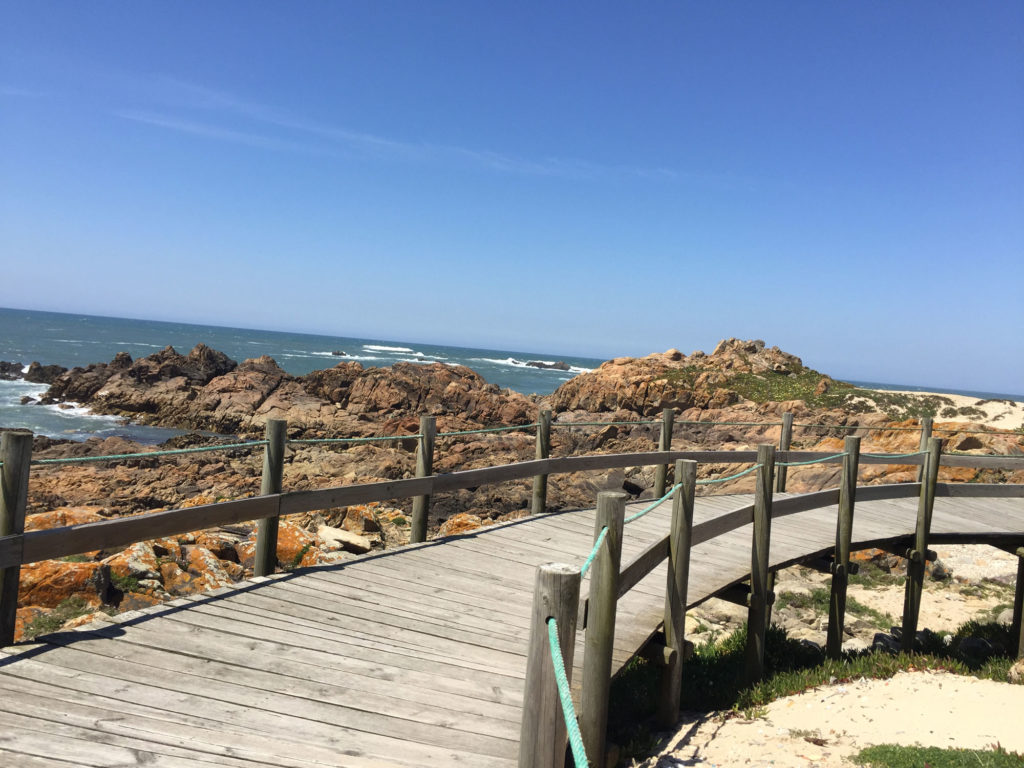 I found the walking along wooden planks fantastic. You don’t have to look out for signposts because it is impossible to get lost along the way. You always have the ocean to look at and orientate yourself as well as coffee breaks in one of the uncountable beach bars.

I have heard from other pilgrims walking with me that they found it boring and not diverse enough. But everyone is different. I was more than happy to spend that much time right next to the ocean.

Soon there will be more new paths from esposende leading along the ocean but momentarily you will still have to walk through woods, localities and beautiful landscapes. As soon as this section will be opened i obviously will make another pilgrimage to it and update my website concerning it. 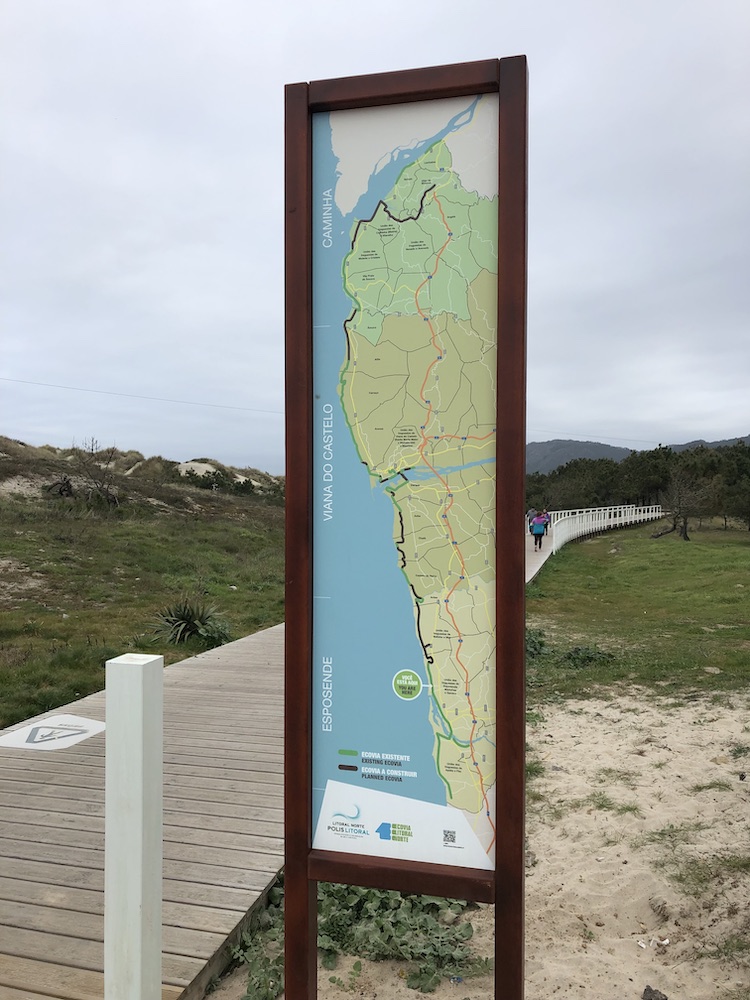 A lot of big guides and websites for this pilgrimage will tell you that you have to stop walking the coastal way at the Spanish border in Caminha and take the central way instead, but that is not true. The coastal way will continue on the Spanish side in A Guarda and it will become even prettier, believe me! 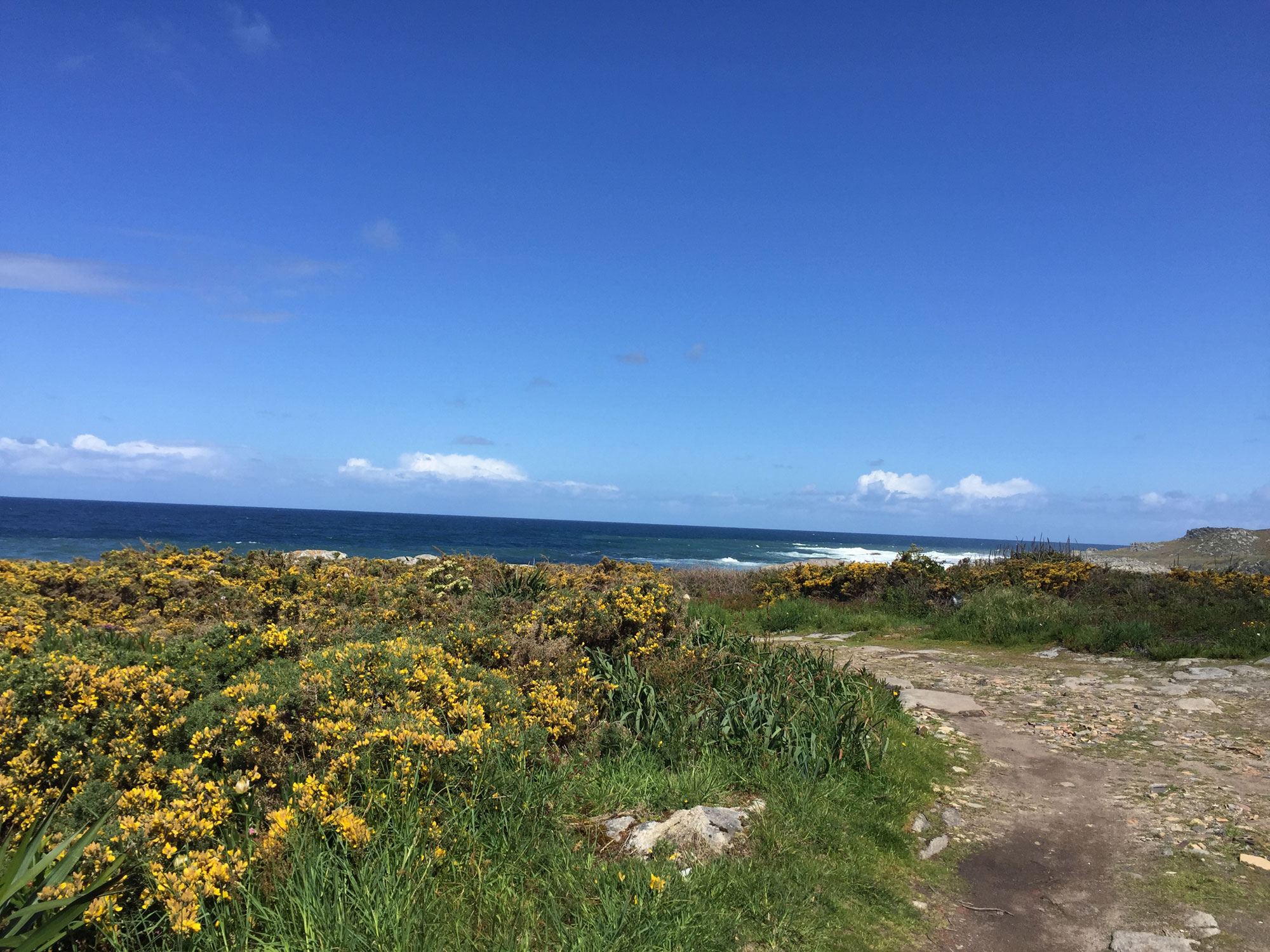 If you want to see more pictures, click here for the picture gallery.

Opposite of what a lot of people say, the path is also equipped well with sign posts and if you want to stay in cheap hostels there will still be more than enough on offer.

Not until Pontevedra will you have to change onto the central way.

And I can declare: everything is beautiful.

Every section has its own charm – the pilgrim path Lisbon – Porto captivates you through the beginning in the beautiful Lisbon through a very international and what felt like a more relaxed co-pilgrimage through pretty cities on your way that you would have never seen if you didn’t walk it.
The inland path from Porto to Santiago is scenic, regional, exciting, offers multiple accommodations and gives you the biggest opportunity of meeting more co-pilgrims.

The coastal path is for everyone who wants to end their pilgrimage at the ocean and who wants to find some peace and quiet after walking a very busy 100km.

Not matter what you picked as your favourite: make a pilgrimage! It is a wonderful, priceless experience! And whoever doesn’t want to call it a pilgrimage, go on a long distance hike on the way of St. James!