In principle, the Portuguese Way of St. James can be walked all year round. However, some months are of course a little more suitable than others. I think April, May, June and September are the best months for pilgrimage.

Sure, even then it will rain and even then it can be too hot, but basically these months have the best climate and it is also not so crowded. Although July and August are not the best months for pilgrims because they are usually too hot, August is the most popular month, which means that the accommodation is fuller and/or more expensive.

And when is the perfect travel time for the Portuguese Camino de Santiago?

With a completely free choice I would actually consider the end of May / beginning of June as the perfect period.

It is long and bright in the evenings and if one has chosen the coastal variant, one can wonderfully put one's tired feet into the sand and have a Porto Tonico mixed while listening to the waves – or, if the temperatures are right, simply go for a swim in the sea. 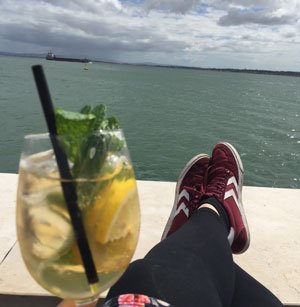 The Portuguese Way of St. James in winter

In the end, the weather in Portugal and Spain is the same as here: there is always a little – or a little more – chance involved.

In 2019 I was on the road for two weeks in October and had 13 of the 14 days of perfect sunshine at just over 20 degrees. Two weeks later I sent a couple to the coast for a week and it rained every seven days. In the same way I already melted completely in the sun in April because it was well over 30 degrees, but I also froze once in early June and had wonderful weather conditions in February.

Between November and February the roads are empty, but you have to keep in mind that this is only Southern Europe and not a completely new climate zone. It rains more often during these months and can get quite cold at night. Therefore, the flights as well as the hotels are much cheaper – whereby the factor “hotel" has to be revised again: the cheap hotels are not necessarily equipped with heating or air conditioning, so that one should rather allow oneself a hotel category higher in winter.

The Portuguese Way of St. James in high summer

As indicated above, I would advise against July and August, although I have to say that I haven't tested it myself yet.

But I ran at over 30 degrees and didn't find it very comfortable. Many pilgrims start at five o'clock in the morning to reach their destination by midday heat. Can be done, it would not be mine.

In my opinion, the perfect travel season for the Portuguese Way of St. James is May, June and September.

But in the end it is also a question of type. For those who are not afraid of rain but appreciate silence, February and November are the perfect months.

If it can't be hot enough and you're an early riser and a sociable person, August is a great time to get going.

I plan your pilgrim holidays – individually and flexibly

Let an experienced pilgrim plan and supervise your very own hiking holiday and start perfectly prepared for the Way of St. James!

I want to know more!